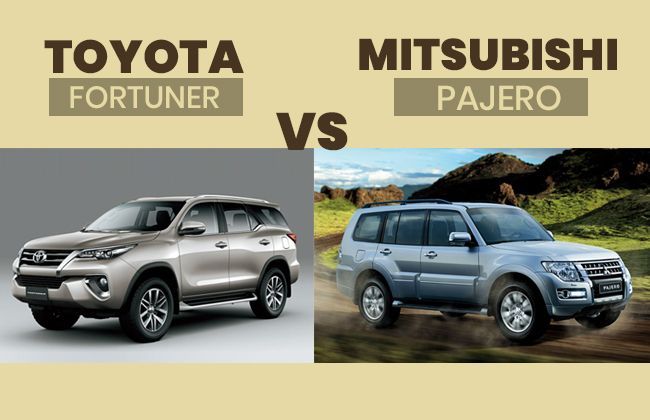 Even while the region’s economy hasn’t been at its strongest in recent times, sales of Sport Utility Vehicles (SUVs) hasn’t faced the brunt as yet. Of course, there are the ultra-expensive ones that aren’t exactly flying off showroom floors but then again, we won’t be focusing on those niche models in this article.

Instead, the models that we are really interested in - as the title indicates - include the Toyota Fortuner and Mitsubishi Pajero. Both these Japanese SUVs are, in essence, proper 4x4s and have been designed and built to endure the rigours of nature. While both these cars are household names in the UAE (among other GCC nations), it is the Mitsubishi Pajero that is undoubtedly the one that’s been around for longer - first going on sale internationally in the early 1980s.

Mitsubishi had announced earlier last year that it will be discontinuing production of its best-selling full-size SUV, though the fourth-generation iteration of the Pajero is still available in showrooms across the UAE. Meanwhile, Toyota’s mid-sized Fortuner has been in the market for over a decade now, and it is built on the same body-on-frame architecture as its latest Hilux sibling.

Presently in its second generation, the latest Toyota Fortuner has been running around on our roads for the past few years. The Fortuner has gone on to become one of the automaker’s best-selling models in the brand’s vast line-up in the UAE.

So if you were in the market for a reliable, practical, spacious and capable seven-seater family SUV -- which one of these should you go with, taking into account a budget of between 130,000 to 150,000 dirhams? Let’s find out.

Parked right next to each other, it soon becomes evident that the Mitsubishi Pajero is larger in all of its exterior dimensions than the mid-sized Toyota Fortuner. The Pajero is not only longer, wider and taller, but also boasts more wheelbase than its Toyota rival. However, despite its size advantage, when it comes to overall boot space behind the last row, the Fortuner takes the cake.

As for styling, the Fortuner sports a rugged ladder-frame chassis, while the Pajero gets an improvised monocoque construction - albeit one that is still not a hundred percent unibody like modern crossovers. Getting into some of the styling nitty-gritty bits, the Fortuner arguably looks more modern than the big, lumbering Pajero.

Toyota’s newer “Keen Look” design language that has been used on the Fortuner makes it appear sharper and sleeker but without losing much of its 4x4 butchness or tough appeal that draws in buyers in this segment to the showrooms. However, if you prefer something even more old-school and raw, then the Pajero’s boxy charms are hard to ignore.

The long, wide stance of the Mitsubishi Pajero makes this SUV look like it won’t be one to be pushed around by your average crossover. Also, while its traditional design approach does mean that it won’t be too friendly towards the phenomena known as drag coefficient, it sure makes this SUV’s styling adhere to the test of time and the masses. The front end of the Pajero gets LED DRLs, large high-intensity xenon headlamps, wide yet deep chrome grille, a bash plate, and a long hood.

The flat-ish side profile sports stylish alloy wheels, flared wheel arches, and beefy side mouldings. The rear fascia of the Pajero comes with a traditional rear-door mounted spare wheel (with cover), a large but flat window, translucent tail lamps, and a faux rear air diffuser. Overall, this is a pretty robust but semi-modern SUV in its appearance.

The interior of the Toyota Fortuner features an upright dashboard and central console design, which makes the operation of controls and features a pretty straightforward affair. However, certain aspects of the centre stack don’t look all that modern (especially the monochromatic digital clock). As for build quality and fit & finish, the Fortuner scores quite well -- most touch-points feel adequately padded and well put-together.

The Fortuner’s cabin feels spacious and well-built, with the front and middle row feeling comfortable yet providing good levels of under-thigh support as well. However, the third-row is decidedly tight and not exactly meant for adults who want to maintain their friendship with those who put them there.

Meanwhile, the longer and wider cabin of the Mitsubishi Pajero may feel a tad bit older in its general layout and design, but space it that is definitely not going to be an issue here - especially when compared to the tighter quarters in Fortuner. And while the fit and finish here is acceptable, the quality of build isn’t at the same level as the Toyota.

However, occupants in the last row of the Pajero won’t be complaining as much as those seated in the third row of the Toyota Fortuner. Now, this might come with the consequence of having less space to store your luggage behind the last row (at just 170 litres), but for the most part, more room for passengers might be preferable.

In the case of convenience features and equipment, the 2020 Toyota Fortuner (GXR) comes with dual-zone automatic climate control, a cooled glovebox, a 4.2-inch digital MID for the driver, paddle shifters, a larger and higher-definition infotainment head unit, and push-button engine start.

On the other hand, the Mitsubishi Pajero specs sheet lists stuff such as 18-inch alloys, leather seat upholstery, cooler box, a large sunroof along with a banging Rockford sound system. Also, the last row of the Pajero is a touch better in accommodating adults than the Fortuner.

If it is power and how these SUVs put it on the road, then the Toyota Fortuner is capable of pushing you to 100 kmph from a standstill in 9 seconds -- the same feat will take around 11 seconds in the Mitsubishi Pajero. However, when it concerns top speed, then the boxier Pajero can actually do 200 kmph. The sleeker Fortuner maxes out at 187 kmph.

Both these SUVs are quite similar when it comes to their safety equipment, and neither would really disappoint or concern you much. However, the Fortuner specs sheet features seven airbags and an auto disconnecting differential, while the Pajero boasts all the essentials that you can expect an older-gen SUV to possess.

Given our initial budget of under AED 150,000, you can get yourself either the mid-spec Toyota Fortuner or the fully-equipped Mitsubishi Pajero. If you value more cabin space, features & equipment, higher top speed, and cheaper maintenance/service costs, then the Pajero is a good buy.

Meanwhile, if you are looking for an SUV with a sleeker design, better cabin materials, unsurpassed reliability, great off-roading abilities, and excellent resale value, more modern drivetrain, then the Toyota Fortuner is hard to beat.

Also read: Renault Duster vs Ford EcoSport - Which one to buy?