Toyota RAV4 Hybrid - All you need to know 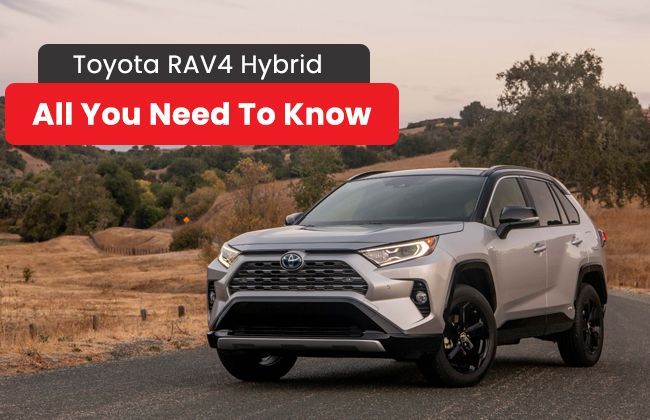 The Toyota RAV4 is one of the most prolific and popular crossover SUVs on the planet. Its rise to fame has been quite the show - the first model hitting showrooms way back in the mid-1990s, the RAV4 has been credited for being the first of its kind, essentially the genesis. While it is a compact crossover, the Toyota RAV4 has grown in size through the years.

If you ever wondered what RAV4 stands for, here’s your answer: ‘Recreational Activity Vehicle: 4-wheel drive’. Of course, like many of its segment rivals, not all variants of the RAV4 come equipped with a four-wheel drive (or all-wheel drive) system, but the name stuck. Speaking of rivals, in the UAE, the all-new Toyota RAV4 goes up against cars like the Honda CR-V, Nissan X-Trail, Ford Escape and Volkswagen Tiguan.

Currently in its fifth generation, the latest iteration of the RAV4 made its formal debut at the New York International Auto Show in 2018 and is built upon the new Toyota New Global Architecture (TNGA). The Japanese automaker uses different versions of their TNGA platform for their other cars which include the new Avalon, Camry, and Corolla.

So which all variants of the new RAV4 are on sale in the UAE right now and how much do they cost?

Out of all the variants, today we are exclusively looking at the hybrid variant of the new RAV4. Starting from AED 139,900 and only available in the top-spec VXR trim, this one sits on top of the line-up. Where the standard petrol-only RAV4s come with a 3-year/100,000-kilometre warranty, the RAV4 HEV brings with it an extended 8-year/160,000-kilometre manufacturer warranty.

When it comes to the exterior design of the 2020 Toyota RAV4 Hybrid, the overall sleek yet aggressive styling has been maintained when compared to the regular variants. However, it isn’t as in-your-face as the more muscular Adventure trim. The latest RAV4 certainly stands out among some of its more subtly styled peers, and more so when compared to its predecessor.

The front end on the new RAV4 Hybrid gets modern and sweptback LED headlamps, a flat-ish bonnet along with a slightly revised front grille, sharply molded but different bumper and a revised lower air-intake with a faux skid plate. Do note that the said revisions are in comparison to the Adventure variant.

The most notable addition to the side of the RAV4 Hybrid comes in the form of the ubiquitous ‘Hybrid’ badges placed over the front fenders. The enlarged wheel arches with their five-spoke 18-inch alloy wheels look quite nice, plus there are enough body cladding and bold contours along the bodywork to put across the RAV4’s ‘SUV’ notions. The new model also gets a less-than-convincing faux floating roof effect on the rearmost pillar.

At the back, the RAV4 Hybrid wears a sporty roof spoiler, 3D-effect LED tail lamps and a protruding bumper with an air diffuser/skid plate arrangement along with dual exhaust pipes. Overall, this is a pretty good-looking compact crossover.

The interior of the 2020 Toyota RAV4 Hybrid looks mostly similar to that of its regular petrol-powered siblings - in that it is well-made, well-equipped, practical and spacious. The only few ways to tell this cabin apart from the rest of the new RAV4 line-up is to look at its engine-start button, which is now coloured blue. Then there’s the instrument cluster which is primarily backlit with the colour blue.

Furthermore, instead of a traditional rpm gauge, the RAV4 Hybrid utilises a ‘powertrain-state’ indicator of sorts - with Charge, Eco and Power as indications for the driver. Finally, there’s the ‘EV Mode’ button placed right next to the gear lever and blue stitching on the leather surfaces.

Toyota has also improved the quality of the materials found inside this cabin, while the levels of overall fit & finish have been upgraded as well. The smart use of glossy black, leatherette and silver trim along with appropriate padding on the doors makes this interior feel quite refined and comfortable.

Available in the top-end VXR trim in the UAE, the 2020 Toyota RAV4 Hybrid specs sheet includes a lot of goodies. Some of the most noteworthy amongst them are:

By the same token of generosity, the 2020 RAV4 Hybrid’s safety suite includes:

The hybrid system in the new Toyota RAV4 produces a combined output of around 219 hp and maximum torque in the region of 221 Nm. The system drives all four wheels via Toyota’s E-Four motor-assisted four-wheel drive technology (basically an AWD system). The RAV4 Hybrid is no slouch, either hitting 100 kmph in 7.5 seconds and carrying a top speed of 200 kmph.

At AED 139,900, the all-new 2020 Toyota RAV4 Hybrid isn’t the cheapest option in the line-up, but one that promises to be really efficient and feature-packed. While it may not be the most interesting car to drive in the world, the RAV4 Hybrid earns points for being a comfortable and well-made family crossover.