Abhishek Katariya on May 03, 2018 for Toyota Camry 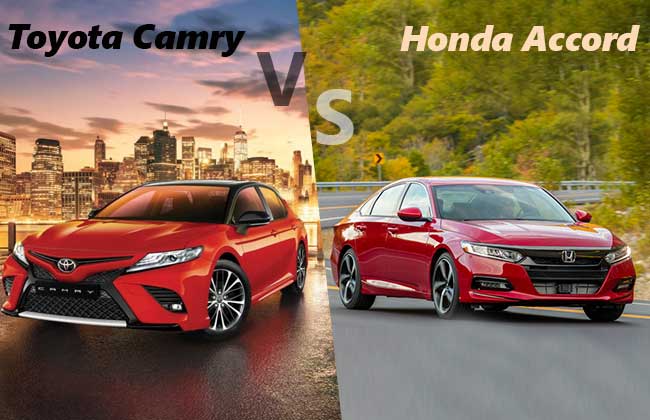 Sedans are probably the most comfortable cars and are designed to be just that and more. While the hatchbacks are mostly considered to be pocket-sized, value-for-money cars, sedans mainly impart luxury and class. However, most of the sedans nowadays are manufactured keeping in mind both comfort and budget-friendliness. Hence, the real instinct of a sedan is entirely missing, especially in the base trims of the cars.

But still, there is a wide range of cars that remain true to the sedan DNA. We are talking about the C-segment sedans, these cars command attention with their strong road presence and impressive features they carry along. Though the number of such cars is limited, the likes of Honda, Toyota, etc. have managed to keep this segment's head high.

And just as one would expect it to be, the Toyota Camry and the Honda Accord are probably the most prominent titans in the C-segment sedan space in the Middle East, and most of the people find it difficult to choose one among the two brands.

However, the two cars - Accord and Camry, differ from each other in many ways, and that is just what you will find as you read on.

The Toyota Camry is definitely not less than a celebrity in the premium sedan segment. The eighth-generation model from the brand is nothing short of a sensation when it comes to power and practicality. It looks incredibly sporty, and it is evident on the front fascia itself. The headlamps are sleek and unique with projector units sitting on them. The bumper and grille carry a rugged appeal, thanks to the black treatment on them. The Camry rides on 18-inch wheels and has quad-exit exhaust pipes.

On the other hand, the Honda Accord is definitely one of the most smartly designed sedans in the Middle East. With the 2018 makeover, Honda has completely revamped the sedan from head to toe. The car is lower and wider than before, which enhances its sporty appeal. However, it gets dual exhaust tips, which looks less attractive compared to the Camry. There are 17-inch alloy wheels for the smaller trims while the top Sport trim rides on 18-inch wheels.

Inside the Toyota Camry, there are many improvements that we see over the previous model. Majority of the cabin gets soft-touch plastics, and the hard stuff is limited to the lower variants. However, there is one thing that will turn you down if you are planning to buy a Camry - smaller sunroof (than the USA-model), standard cruise control and an 8-inch touchscreen infotainment system.

Getting inside the Honda Accord is always a better thing to do. The cabin is classy and comfortable at the same time. The legroom has improved by a great margin over the previous generation. The 8-inch touchscreen infotainment system supports both Apple’s CarPlay and Google’s Android Auto.

The Honda Accord, on the other hand, comes with a turbocharged engine that generates great power. The smaller 1.5-litre engine makes a maximum power of 198 hp at 5,500 rpm while making 260 Nm torque at 1,600-5,000 revs per minute. The 2.0-litre turbocharged 4-cylinder engine can make a maximum power of 247 hp at 6,500 RPM and highest torque of 370 Nm at 1,500-3,500 rpm. For the smaller engine trims, there is a CVT gearbox attached to the engine while the bigger engine gets a 10-speed automatic unit.

Here, the Honda Accord is more powerful when it comes to the base trims. However, the top-end trim of the Camry is seriously powerful and can hit an acceleration of 0-100 kmph in just 5.8 seconds.

The Toyota Camry and the Honda Accord are more or less similar in terms of pricing, with the latter being slightly more expensive. However, that said, it looks more like a classy estate sedan rather than a regular passenger vehicle.

On the other hand, the Toyota Camry looks sporty, and the interior and the V6 engine just add to its sportiness. It has better power at driver's disposal and is more responsive under the hood. It has the fun-to-drive factor in its genes.

Abhishek Katariya on May 03, 2018 for Toyota Camry

Toyota Camry vs Honda Accord Comparison

Honda Accord
Camry vs Accord
Share this article
1134 Views