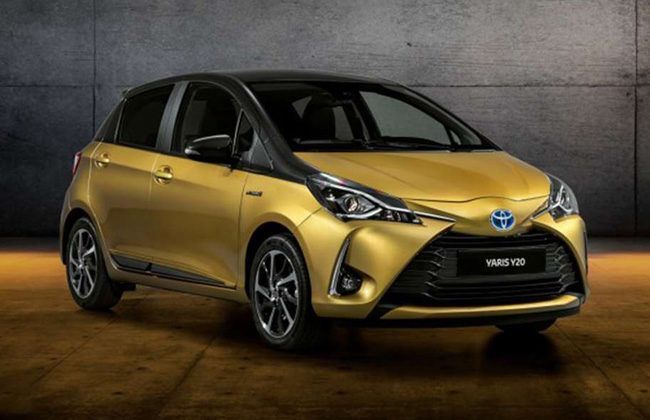 ABU DHABI: Toyota brings a gold-painted special edition to make the 20th anniversary of Yaris special. The Yaris was first showcased at the 1998 Paris Motor Show, and immediately after that, the B-segment hatchback was released in the European and Japanese market. It is now in its third generation and is still one of the best hatches, even after two decades of existence.

The special edition of the Toyota Yaris has been launched just to prove how remarkable it has been for the company. It comes with a new design which can be customised according to the needs of the customer. The special Y20 is painted in gold, just like the vehicle launched in 1998. But yes, the carmaker offers a dual tone exterior with a grey-coloured roof. Along with these, the hatch has 16-inch 10-spoke alloy wheels that are painted in grey, side mouldings and foglight.

At the rear, a shark-fin antenna, darkly painted rear privacy glass (tinted) along with a special ‘Y20’ badging are the notable features.

Inside the car, the cabin is painted in dark grey all around. The dashboard, steering covers and dashboards, all get the dark grey colour tone. It makes the interior designing a bit on the classy side. The cabin features audio speaker for the entertainment system and visually good-looking satin chrome coloured air vents. Apart from these, an additional Y20 badging and unique carpet mats (in black colour) are also offered.

The 2019 Toyota Yaris Y20 features an all-new multimedia system which has an inbuilt smartphone connectivity. This means the user can access popular applications easily and can also connect to the contacts. After connecting the smartphone, one can operate it via the touchscreen. The system also has multi-touch gestures enabled and supports smartphone-based navigation and voice commands too.

The Toyota Yaris Y20 is launched in Europe. However, there is no news regarding the vehicle and its availability in the UAE.