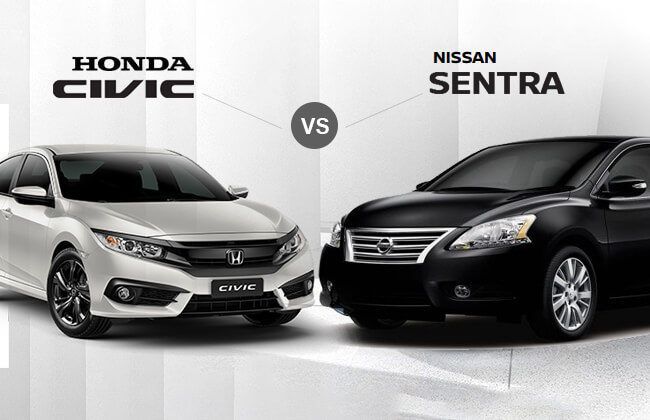 Nissan has got its roots firmly entrenched in the UAE. Its products have a high resale value here and they are widely regarded for their reliability. The Nissan products are regarded as ones with the highest bang for the buck value. In fact, some of their products also are far more affordable than even the competition’s lower segment models. You can’t beat that, can you?

However, there is a serious competitor to Nissan’s dominance here and it is from the fellow Japanese brand, Honda. The big H has also slowly established itself in the United Arab Emirates and while its products aren’t as affordable as Nissan’s, the desirability quotient is higher. Proof? All the latest products from Honda have a huge waiting period. These products command a premium quotient over any other manufacturer’s offerings and that in itself is a testimony, isn’t it?

In the compact car segment, both have got their prizefighters in the form of Nissan Sentra as well as the Honda Civic. The latter is the newer car here and has got off to a very good start, worldwide.

Nissan updated the Sentra two years ago and we all unanimously agree that when it comes to updates, Nissan isn’t the most magnanimous of them all. So, this seems like a one-sided battle. We don't think so.  Find out by scrolling down.

One look at the Honda Civic and the people around you will definitely know that you’ve arrived in life. Seriously, look at that thing. It oozes style from every end. Be it the wide grille, the sleek headlamps, the coupe-like roofline, or the C-type tail lights. Honda has chosen appropriate alloy wheels that gel well with the overall image of the car. It screams sporty and fun from every angle. Compared to it, the Nissan Sentra seems way too plain jane. It looks like the now-dysfunctional Teana and that could have been a good thing a couple of years ago. In this age of modern designs, the Sentra doesn’t cut the mustard. The design though will age well more than the Civic’s. Buyers who prefer an A to B mode of transport could very well go for the Sentra.

The Civic is as flamboyant on the inside like outside. It has a horde of technology, a touchscreen infotainment system that also is complete with the latest in terms of Apple CarPlay and Android Auto. There is also cruise control, a head-up display, powered front seats, sunroof, dual zone climate control, leather seats, rear AC vents, powered sun blind, monochromatic mirror and more. Seating space in the front is quite good while at the back, due to the sloping roofline, headroom is a tad less. Honda has ensured that everything looks premium here and the all-black upholstery while looking gloomy, doesn’t feel badly put together.

The Nissan Sentra too hasn’t been put badly either. However, the interior is just vanilla. There is better cabin space for five, however, the transmission tunnel intrusion may rob the rear middle passenger of some leg space. Nissan gives you a push button start, touchscreen infotainment system complete with navigation but without Android Auto or CarPlay, electrically adjustable driver’s seat with heating function, single zone climate control, rear AC vents and Bluetooth telephony. The Nissan also makes use of lighter upholstery which enhances the space in the cabin. Boot wise too, the Nissan holds a larger cargo than the curved, shrunken boot of the Civic.

Both the cars here can be opted in two engine options. Starting with the older Nissan Sentra’s unit, one can option it with a 1.6-litre or 1.8-litre naturally aspirated petrol units. The 1.6-litre engine produces 113 PS of power at 5,600 rpm and 154 Nm of torque whereas the 1.8-litre engine makes 130 PS of power and 174 Nm of torque. While a 5-speed manual is available on the smaller engine, the 1.8-litre gets a CVT option too. Nissan calls it X-Tronic CVT. The 0-100 kmph run is completed by the smaller engine in 13 seconds whereas the 1.8 does it in 11. The top speed is 14 kmph apart with the 1.6 registering 166 kmph.

Honda has got the Civic to UAE with three engine options and all petrol. The smaller 1.6-litre naturally aspirated motor with i-VTEC makes 123 PS of power and 151 Nm of torque. This engine will be mated to a Continuously Variable Transmission or simply CVT. The bigger motor is also a naturally aspirated unit that displaces 2000cc and makes 158 PS of power and 187 Nm of torque. A CVT with paddle shifters is again standard here. In terms of performance, the 1.6 does the run of the mill in 11 seconds whereas the bigger motor does it in 9.8 seconds. Real world efficiency hovers around 17 kmpl for the 1.6 and 15.1 kmpl for the 1.8. Quite nifty then. If you were wondering about the top speeds, then the 1.6-litre engine takes the car past 175 kmph whereas the top whack of the 1.8 is just shy of 210 kmph.

We saved the best for the last. There is also a 1.5-litre turbo petrol that also combines i-VTEC. This engine makes 180 PS of power and can race to 100 kmph in just 8 seconds. The top speed is closer to 230 kmph. The efficiency of this , when mated to the CVT unit,T unit is around 16.4 kmpl.

Refinement is very good with all four engines but the Honda is slightly better in its NVH.

In terms of ride and handling, Nissan has always favoured the former and this is the case with the Sentra too. It rides very good and infact, the far and few potholes one encounters here in UAE, they are dispatched with aplomb. We believe Nissan should have focussed more on the handling depending on the region where they sell the car. However, we understand that this will also mean more input costs and testing time with the new set up. The car handles well too but you can decipher and there are a few things which could have been better too. Like the ultra light steering wheel.

The Nissan Sentra gets you four airbags, ABS with EBD, and Hill Assist. The Civic in the meanwhile nearly doubles the airbag count while adding Traction Control, Brake Over Ride system, Vehicle Stability Assist, Agile Handling Assist, Tyre Pressure Monitoring System, and ISOFIX child seat mounts. The Sentra was tested by GNCAP a while ago and got four stars while the Civic when tested, got a star more.

The Honda Civic prices start from AED 74,900 whereas the Nissan Sentra prices start as low as AED 57,750. However, for the price difference, you get a much more modern and desirable car. If you can spend that amount of money, indeed buy the Civic. If you are cash strapped, then the Sentra will do your bidding for much less.