How good is the Chevrolet Trailblazer against the Toyota Fortuner? 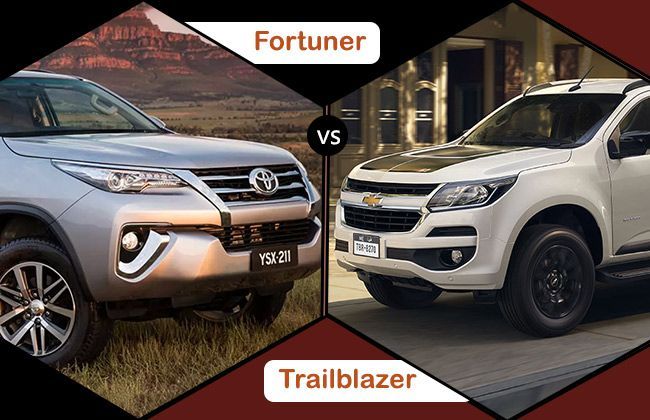 The Chevrolet Trailblazer is currently one of the most popular offerings from the company in the Middle Eastern market and manages to take on a plethora of competitors. Having said that, let’s not forget how legendary the Toyota Fortuner has been over the years and might even overshadow the Chevrolet in sheer sales numbers.

However, how is the scene if you really place the two cars side by side and compare them head on, based on pre-defined parameters. While the Trailblazer has received a good facelift in the year 2017 and is said to have taken the SUV market to the next level, Toyota sells the Fortuner as their cheapest SUV offering the market.

So, let’s find out how the two cars would fare once they are thrown against each other in a detailed comparison.

What’s in the design?

The legacy of the Chevrolet Trailblazer proves that it is a very rugged SUV on the block. The split grille up front and the muscularity of the bonnet cannot be ignored. The car does not have a lot of sharp styling but depends more on the size to woo the people. The wheel arches aren’t very prominent and so are the front fenders.

The roof rails are shallow. However, though the rear has a split tail light section, the designing is very simple. The car drives on black or aluminium painted 18-inch alloy wheels as standard.

On the other hand, the Toyota Fortuner is undoubtedly one of the best-designed SUV in the market, just like it has always been. Even if you think the design is very subjective, one has to vouch for the Fortuner to be better for its styling. The butch front fascia with a lot of chrome and sharpness does turn out to be the better visual.

Though the wheel arches aren’t very prominent, the addition of slim black cladding calls out to be noticed. The shark fin antenna and the rear roof spoiler are always better and welcomed additions. The skid plates at both ends are very noticeable.

Get to the rear and you will be greeted with a chrome strip on the boot door handle and the sharp tail lights that split at the tailgate. The car rides on 17-inch alloy wheels as standard while the top trim has the 18-inch unit.

Features on the inside

The Chevrolet Trailblazer does come with a host of features inside the cabin. There is a 7-inch touchscreen MyLink infotainment system for the lower trims while the top models have an 8-inch unit. Steering wheel mounted control buttons are standard, and so is the leather cover on it.

The infotainment system is linked to seven speakers in the top trims which is reduced to four in the lower.

On the contrary, the Toyota Fortuner specs sheet reveals an 8-inch touchscreen display for the top trims, while six speakers are standard in all. The steering will have a better appeal as it has both leather as well as wooden trims added. However, there are some features that are similar in both the models, like the automatic climate control, paddle shifter and audio and call buttons on the steering.

The Chevrolet Trailblazer specifications registered one engine option, which is a 3.6-litre V6 motor. This engine is extremely powerful and can make a maximum power of 275 PS along with a peak torque of 350 Nm. The power is sent down to either the rear wheels or all the wheels via a 6-speed automatic gearbox.

However, the Toyota Fortuner is available in three different options mechanically. There is a 2.7-litre unit that can make a maximum power of 158 PS and a peak torque of 241 Nm. The other engine V6 is the most powerful option with 235 PS on paper and makes 343 Nm of torque.

However, the top engine trim is a turbocharged 2.4-litre unit making 147 PS of power and a whopping 400 Nm of torque. A 6-speed automatic transmission is standard in all while the base model also gets a 6-speed manual. The 4WD is given as a standard fitment.

Though the Fortuner is the most affordable SUV from Toyota, it is more expensive than the Trailblazer. The features offered in both the models are pretty much the same. However, when you consider the design, the Toyota SUV is a clear winner at it has a very urban approach mixed with the muscularity.

In terms of the mechanism too, thought the Trailblazer has a more powerful engine, the high torque and more trim options make the Fortuner the better car to choose, any day.