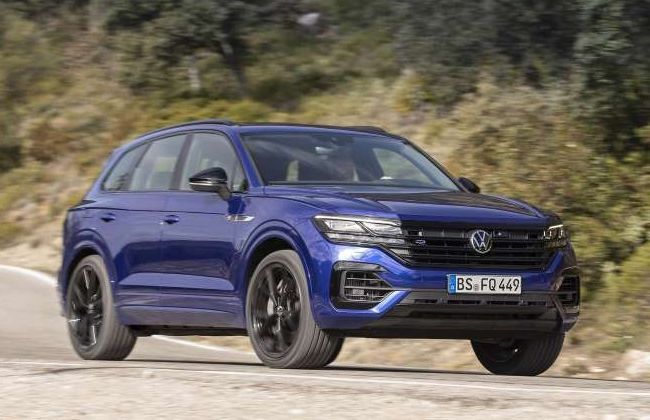 Volkswagen Touareg is one of the most popular mid-size SUVs in almost all the countries it is sold in. However, cometh the Geneva Auto Show 2020 and the German automaker is set to introduce the plug-in electric hybrid form of the Touareg R to the public.

The Volkswagen Touareg R will be powered by a combination of a 3.0-litre V6 gasoline engine with an electric motor. The combustion engine can produce a maximum power of 340 PS, which the electric motor can make an additional 136 PS. The combined power from the PHEV drivetrain would be a whopping 462 PS and 700 Nm.

The produced power is sent to all the wheels via an 8-speed automatic transmission gearbox. The drivetrain also has a torque converter and the 14.1 kWh battery pack is packed under the cargo floor.

The cabin of the Volkswagen Touareg R PHEV would be a very innovative one. The infotainment system gets a large 15-inch touchscreen display, while the digital driver’s console is a 12-inch unit. The car gets assistance features, like lane-keeping assistance, active cruise control, etc. The car gets Matrix LED as standard. Also, the Night Vision camera detects animals and people in the dark.

The Volkswagen Touareg R PHEV is set for the European market. So, we might not get the petrol-hybrid car in the Middle East any time soon. As of now, the German automaker sells the Touareg in 2.0-litre, 4-cylinder and 3.0-litre V6 powertrains (both 4WD).

Volkswagen Touareg Alert me when launched