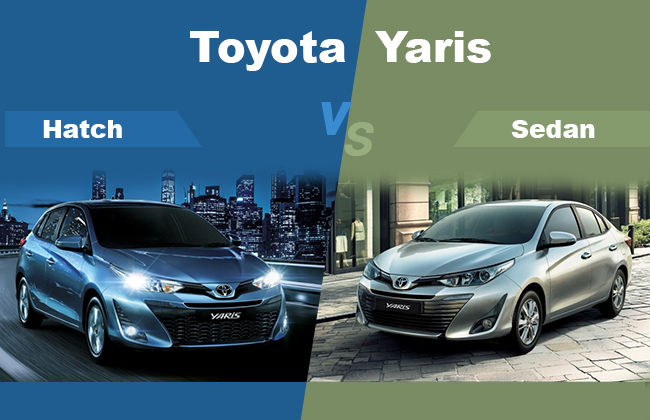 The Yaris is one of Toyota’s most successful cars. After being a hit amongst the home crowd, the company is now introducing the new Yaris on the global platform. The UAE is one such country to receive the treasure called Yaris.

Toyota Yaris is offered in hatchback and sedan body type, and both available in the UAE. The 2018 Yaris Hatchback was unveiled at the Dubai Motor Show, where it captured many hearts with its practicality and stunning design updates. The new Yaris Sedan 2018 is the more recent launch amongst the two, recently introduced at a private event in Dubai.

Since the two cars arrived in the UAE, they have confused the buyers on many ends. Amongst the various questions emerging in their minds two prominent ones are -

Considering the two questions, we are comparing the Yaris Hatch with Yaris Sedan on parameters like - design, features, performance, and safety.

The Yaris hatchback is available in two variants, 1.3L SE and 1.5L SE+. As evident, the former is powered by a 1.3-litre four-cylinder DOHC engine that produces a maximum output of 99 PS and 124 Nm. The 1.5-litre option generates higher power output of 106 PS along with a peak torque of 141 Nm. On the fuel economy front, the two displays a satisfactory reading of 18.7 kmpl and 19.5 kmpl respectively.

The Yaris Sedan like the hatchback version is available in two trim options - SE and SE+. Both the sedan variants are powered by 1.5-litre four-cylinder DOHC engine producing the same output as under the hatch hood (106 PS and 124 Nm). The fuel economy, however, witnesses a slight rise with the 20 kmpl mark.

Toyota has adopted same design language for both the sedan and hatchback body-styled Yaris. Aside from the visible dimension and body shape difference, the two cars look similar. Included in the list of standard styling features are - a sleek grille connected with projector halogen headlamps, chrome door handles, powered ORVM with turn indicators, and keyless entry. It is through the faux air intake with added LED strip that one could set apart the two Yaris.

Amongst all, what’s best is that the 2018 Yaris Sedan and Hatchback share same safety spec. The buyer, therefore, can be sure about the safety of his family members with both the cars. Both the SE and SE+ variants are fitted with safety elements like Anti-Lock Braking System, Brake Assist, Dual Front Airbag, Electronic Brake Force Distribution, rear window defogger, tire pressure warning system, Vehicle Stability Control, Rear Parking Sensors, and ISOFIX.

As far as the question of the better option is concerned, both Yaris hatchback and sedan are packed with the same features, available at a somewhat similar price. It therefore mainly depends on the buyer usage and needs. While the hatchback would offer ease of parking and daily commute through traffic, the sedan with higher power and longer stance would be fun to cruise around the beautiful UAE.