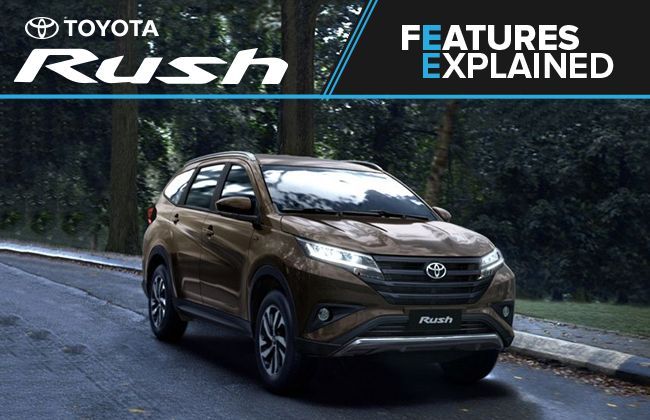 The latest Rush is one capable SUV from Toyota that has gained quite a bit of popularity in the local region. Be it the aggressive and sharp design or spacious interior, the Toyota Rush promises to give you a good package at a justifiable price point. Considering the growing trend of SUVs in the market, the all-new Rush seems to have got all the bells and whistles to woo in customers. It comes in 5 color options - White, Silver Mica Metallic, Dark Red Mica Metallic, Bronze Mica Metallic, and Black Metallic. We are going to discuss some of the features of the Rush that would help you understand the vehicle better.

The all-new Rush has got an aggressive yet attractive design. The overall road presence of the car is quite noticeable. At the front, you are greeted by a large chrome grille with broad horizontal slats. These slats are perfectly matched with the design of the LED headlamps. Completing the look are the LED daytime running lights. Then we have a sporty front bumper with fog lights. Frankly speaking, the Toyota Rush has got an aggressive and mean-looking face, which you wouldn’t like to see in your rearview mirror.

The side profile of the SUV carries the prominent presence. The dimensions are huge. The sharp 17-inch alloy wheel design enhances the premium-ness. The roof rails help too. Toyota has also provided a sharp character line on the side which meets the tail light at the back. Talking about the tail lights, these are large two-piece combination units that cover up quite some space. We also have a roof-mounted rear spoiler for that added sportiness.

Being a 7-seater, the Toyota Rush has got plenty of space inside. The seats are pretty comfortable and provide good support. The leg and headroom for the passengers of the second row are also sufficient. It is the last row where full-size adults might face a bit difficult to stay for a longer period of time. Both the second and last row seats can be folded down to increase the luggage carrying capacity. You can adjust them as per your requirements.

The overall ambience and feel of the interior are great. The black and beige color theme is inviting and makes the cabin appear to be much roomier than it actually is. The automatic AC works well to keep you cool in the hot summers. The keyless entry and push start features are also a nice touch. The dashboard is very well designed with most of the controls easily reachable by the driver.

The steering wheel has a few mounted controls for audio. The audio system here supports AM, FM, AUX, CD, USB, and Bluetooth connectivity. Behind the steering wheel is a conventional instrument cluster with two dials - tachometer and speedometer - and tell-tale lights. There is also a digital display in the centre which shows information like fuel level, odometer, etc.

The Toyota Rush specs reveal that this 7-seater SUV is powered by a 1.5-litre 4-cylinder Dual VVT-i (Variable Valve Timing-intelligent) engine that has been tuned to produce 103 hp at 6000 rpm and a peak torque of 135 Nm that kicks in at 4200 revs. This engine is mated to a 4-speed automatic transmission. Toyota says that it has worked to make sure that the Rush has got an optimal combination of performance and fuel efficiency. The claimed fuel efficiency is 16.3 kmpl. With that figure and 45-litre of fuel tank capacity, the Toyota Rush can take you more than 700 km in a full tank.

There are not too many safety features on the new Rush, but Toyota has covered a few basic ones. You get dual front airbags, curtain airbags, ABS, Tire Pressure Monitoring System (TPMS), Vehicle Stability Control (VSC), Hill-start Assist Control (HAC), rear parking sensors with a rearview camera, etc.

Coming from the house of Toyota, the Rush is entitled to the various recognition that Toyota is known for - reliability, durability, etc. The Toyota Rush price here in the UAE is AED 68,500.