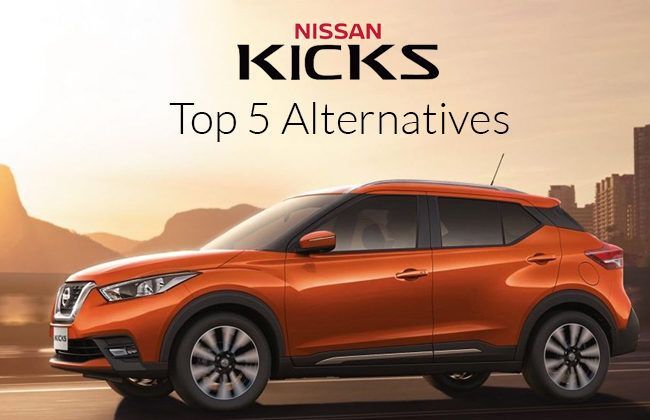 The Kicks is a make-or-break car for Nissan not only in UAE, but all over the world. As the trend of compact SUVs in on a tremendous rise, the Nissan Kicks plays an important role, for it is now serving as the global compact SUV common for all markets. With a premium appeal consisting of stylish exteriors and thoughtful interiors, the Nissan Kicks is an apt choice for those looking for an SUV which has a decent road presence but is not intimidating to drive.

However, the road for success for Nissan Kicks is not going to be too easy, for the fact that it has some really worthy and noticeable competitors to look for. Following are the top five similarly priced compact SUVs which give a tough fight to Nissan Kicks and act as apt alternative to Nissan’s all-new compact SUV:-

First and foremost, the Kicks has the biggest competitor right within the family itself, its distant cousin, the Renault Captur. Since the Captur shares its platform and powertrain options with the Kicks, there are a lot of similarities between these two vehicles in the way they perform and behave. But when it comes to the way they look, both these vehicles are entirely different. Compared to Kicks, the Captur has a more crossover-sih appearance, which is fairly sizeable to give it an impressive road presence. Also, there are a couple of extra features on the Captur which make it look trendier and more European in actuality. Powering the Captur is a 1.6 liter X-tronic petrol engine from the Kicks itself, which produces 115 bhp of power.

The compact SUV offering might be a bit underrated in personal, but make no mistake, the MG ZS has all the ability to rewrite the rules of compact SUV. The ZS is near to perfection in all the areas – stylish exterior design, feature-laden interior cabin and a powerful 1.5 liter 120 PS petrol engine. However, as compared to the Kicks which has a strong backing of Nissan as a prominent brand in UAE, the MG still has a lot of work to do, and honestly, this is the only reason which is curbing the ZS to shoot up to become the segment best seller.

The Rush might not be a direct competitor to the Kicks, but considering the fact that both the vehicles fall in the same price band, the Rush cannot be ignored. A highly successful model globally, the Rush comes with an extra pair of seats and an almost equally powerful 1.5 liter petrol engine. However, what gives the Kicks an upper hand is the plush interior cabin with a number of features over the Rush. The Toyota Rush feels a bit lacking in the aspect of equipment, with the crossover offering only the basics. The Rush sources its power from a 1.5 liter petrol engine which pumps out 103 bhp of maximum power.

Like the MG ZS, the Hyundai Creta too is one near-perfect model which is tailor made for markets where the sales of compact SUVs are at an all time high. However, as compared to Kicks which is available with a petrol engine, the Hyundai Creta is offered only with a 1.6-litre diesel engine, which is equally powerful with its 126 bhp of maximum power output. Like the Kicks, the Creta offers impressive design on the outside and an even more likeable interior cabin loaded with features, making it the current benchmark in terms of value for money.

Last but not the least, another globally renowned name which is helpful in its parent maker for making the cash registers ringing is the Chevrolet Trax. The Trax is slightly smaller in size as compared to Kicks, however, in comparison, the compact SUV from Chevrolet has got a bigger and more powerful 1.8 liter 140 bhp petrol engine. Also, the Trax has got more traditional looking haunches and stance of a conventional SUV, giving it a more heighted appearance. And lastly, it is one of the very few compact SUVs which are available with an optional AWD system, giving it an additional edge over others here.