Nissan is one of the most popular mainstream car manufacturers to hail from the island nation of Japan. The carmaker considers its Patrol SUV as an icon of its own. The company describes Patrol as an ideal combination of prestige, purpose and heritage. Even though Japanese carmakers took from the inspiration from British carmakers during the late 20th century, but things are much different now.

Speaking of heritage and British carmakers, Land Rover Range Rover is another off-roader that has managed to secure its very own loyal consumer base in the United Arab Emirates over the course of years. Even though the two Sports Utility Vehicles offer contrasting juxtaposition to one another, their popularity in the much-coveted SUV segment has compelled us to compare the two contenders against one another to find out which is the ultimate high rider for you.  So let's take a look.

The Japanese SUV is only available in a single size whereas Land Rover offers its Range Rover model in both standard as well as long-wheelbase variant. It is interesting to notice that other than the boot capacity which is compromised by Nissan Patrol’s 8- seat layout, the Japanese offering manages to outshine the British SUV when it comes to every other dimension for both long and standard wheelbase versions. 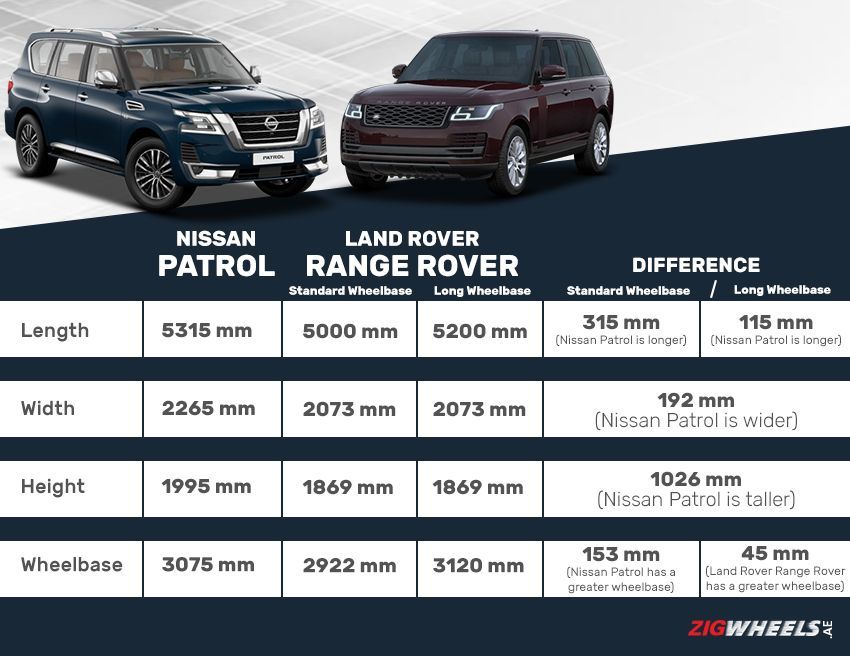 Nissan claims that Patrol was designed to exude an intimidating presence on the road while exuding sleekness through its design. At the front we find C- signature LED lights in the headlight cluster on both sides of the grille that features horizontal slits that amplify the width of the SUV. The bonnet features a bulge that is meant to express the toughness of the off-roader which rides on completely redesigned alloy wheels.

Land Rover Range Rover flaunts a floating roofline that compliments the iconic SUV’s globally recognized silhouette. The front grille has now been completely redesigned and features a honeycomb design whereas the bonnet, unlike Nissan Patrol, has been smoothened and elongated to exude the truck’s formal appeal.  The new Land Rover Range Rover also comes equipped with pixel laser headlights at the front and LED lights at the rear.

The interior of the Nissan Patrol has been designed to exude refinement and luxury. The 8-seater cabin is wrapped in soft to touch leather and the dashboard comes equipped with a touchscreen infotainment system with Apple CarPlay and Android Auto connectivity. The infotainments unit comes paired to a premium Bose surround-sound audio system.

In a true Land Rover tradition, the 5- seater is much more premium and luxurious than the Japanese SUV which is understandable considering the premium price tag. The plethora of creature comforts and luxurious features offered in Range Rover manage to outshine Nissan Patrol quite easily. Some highlights of the British SUV include heated calf rests, 10- inch touch screen with Connect Pro connectivity and 4G Wi-Fi for the rear seats, remote intelligent seat fold application, etc.

Both Nissan Patrol and Land Rover Range Rover come equipped with four-wheel-drive as standard across their entire range. Land Rover Range Rover specs sheet carries four different powertrain options whereas Nissan Patrol is only available with either a V6 or a V8 engine. The 5.6- liter Nissan Motor manages to outshine the 6 cylinder engine in the Range Rover by accelerating from 0 to 100 kph in just 6.6 seconds but understandably the 5- liter V8 in the Range Rover is much faster to the 100 kmph mark and manages to complete the sprint in just 5.4 seconds. 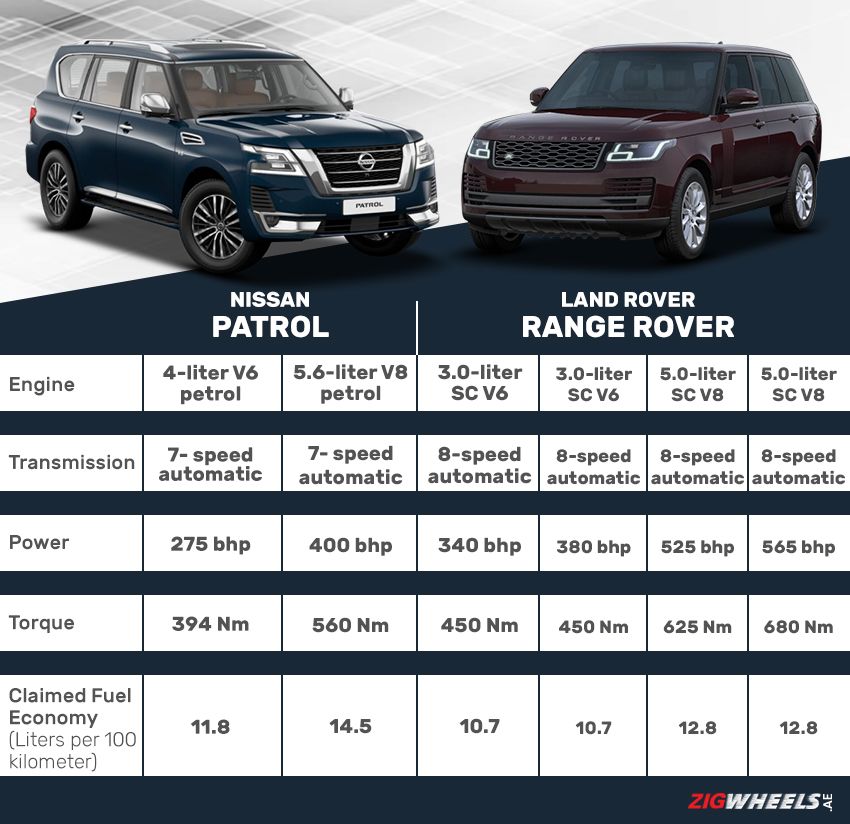 Both Nissan Patrol and Land Rover Range Rover get a wide variety of advanced safety and driver assistance features however there is more safety equipment available in the Range Rover than Nissan Patrol. Land Rover Range Rover is available in a nine variant lineup which includes both standard and long-wheelbase versions. The British SUV is priced at a premium and even the base variant is more expensive than the top of the line model of the Nissan Patrol. 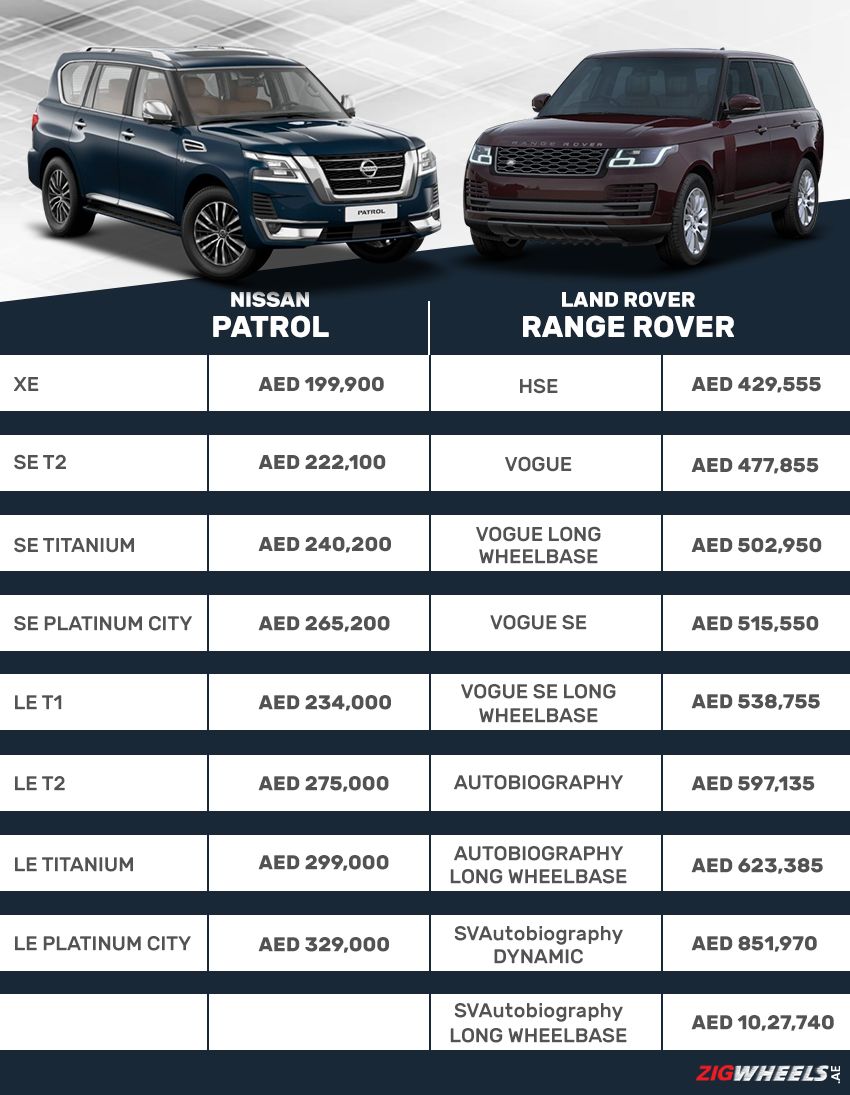 Like we mentioned earlier, the two cars are contrasting offerings, to say the least, but their popularity is definitely comparable. So finally it comes down to what the potential buyer’s budget and requirements such as boot capacity, number of seats and performance. Needless to say, both SUVs are icons of their respective segment.