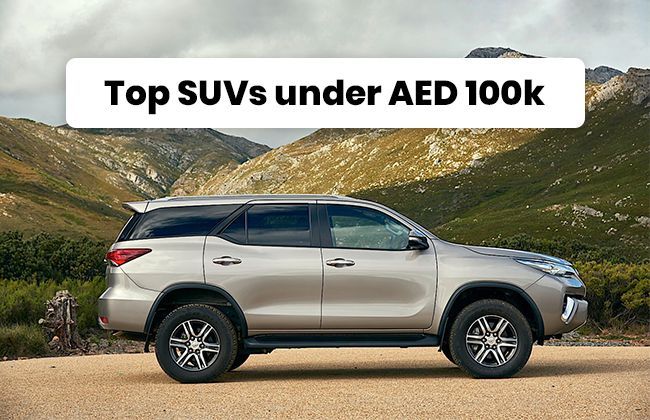 The SUV segment is on the rise across the planet. As more and more markets are seeing the customer interest shifting towards the SUVs and crossovers, the automakers are also not leaving any stone unturned in order to bring out newer and better offerings to cater to the increasing demand. So much so that the automobile manufacturers like Volkswagen have even started to discontinue some of their sedan & hatchback models to make way for the trendy SUV & crossover offerings. So, when the masses from around the globe are craving for SUVs and crossovers, how come UAE lag? And, if you are also looking forward to getting yourself an SUV or a crossover under AED 100,000, this story is going to be of great help to you.

With that said, let's have a look at some of the best SUVs in the UAE automobile market under AED 100,000.

Just like any other segment in the automobile market, you will also find the SUV category crowded with several Japanese models. And, the Mitsubishi Montero Sport is another Japanese SUV that has tasted great success all over the world. Let's start with the looks of the SUV then. The Mitsubishi Montero Sport packs in a brawny and attractive stance thanks to the muscular bumpers, alluring cuts & creases, automatic LED headlamps with built-in LED DRLs, large front grille with chunky chrome trim pieces, front fog lamps, tear-shaped LED taillamps, high-mount LED stop lamp on the tailgate, stylish roof rails, and large 18-inch alloy wheels.

While the inside of the Mitsubishi Montero Sport might not be the best in terms of modern-day tech, it does the job quite well and is poised with all the needed creature comforts. A sporty four-spoke multifunction steering wheel, leather upholstery, dual-zone automatic climate control, sunroof, multiple USB ports, touchscreen infotainment system with Mitsubishi Power Sound System, multi-around monitor, and many other features provide the occupants with a premium experience inside the SUV.

Lastly, the Mitsubishi Montero Sport specs include a 3.0-litre V6 MIVEC engine that generates 217 hp of maximum power and a peak torque of 285 Nm. An eight-speed automatic transmission sends the power to the wheels, and the SUV also features 2WD, 4WD, and an off-road mode. The Mitsubishi Montero Sport is available in four variants and is priced at AED 79,900 to AED 109,000.

Here comes another Japanese SUV making a case for your next SUV. Available in EX and GX variants, the Toyota Rush in the UAE can be yours for as low as AED 68,500. In terms of looks, the Toyota Rush flaunts a large grille with chrome slats, which is flanked by upswept LED headlamps. Just below the headlamps, we find a pair of LED fog lamps that reside in chrome finished housings. Furthermore, a muscular hood provides the Rush with an intimidating posture. Then the 17-inch alloys, roof rails, rear spoiler, and skid plates at both front and back equally contribute to the appealing looks of the SUV.

On the inside, features like keyless entry, fabric seats, push-button start & stop, automatic climate control, sporty three-spoke leather-wrapped steering wheel with audio controls, all four power windows, and a touchscreen infotainment system with up to 8 speakers enrich the experience for the passengers. Powering the

Toyota Rush specs include a 1.5-litre four-cylinder mill that is capable of producing 103 hp & 135 Nm and returns a mileage of 16.3 kmpl. Both the EX and GX variants of the Rush get a four-speed automatic gearbox and ride on 17-inch alloy wheels. The Toyota Rush is safe as a house thanks to the safety features like multiple SRS airbags, anti-lock braking system, vehicle stability control, hill-start assist, emergency stop signal, ISOFIX child seat mounts, and a rearview camera.

The last car in our story today is the Kia Sportage, a South Korean SUV that is known for its immaculate looks, potent powertrain, and high-quality fit & finish. The Kia Sportage in the UAE is available in as many as 11 variants and carries a price tag that ranges from AED 73,500 to AED 113,500. The Sportage specs features an enticing appearance that is provided by a well-proportioned structure, Kia's signature tiger-nose grille, xenon headlamps with LED DRLs, LED-type rear combination lamps, up to 19-inch alloy wheels, shark fin antenna, silver skid plates, LED fog lamps, chrome tailgate garnish, chrome side sill garnish, and dual exhaust outlets.

The four different engine options available on the Kia Sportage produce from 132 hp to 184 hp of maximum power, and the transmission options include a solitary automatic gearbox that features both front-wheel-drive and all-wheel-drive on different models.

Which of the aforementioned SUVs did you like then? All of the Mitsubishi Montero Sport, Toyota Rush, and the Kia Sportage offer attractive looks, feature-laden interiors, and very capable powertrains. On top of that, most of the variants carry a price tag of below AED 100,000 and won't hurt your pocket either.

For more such informative stories in future, stay connected with ZigWheels UAE.