Renault Talisman - Should you buy? 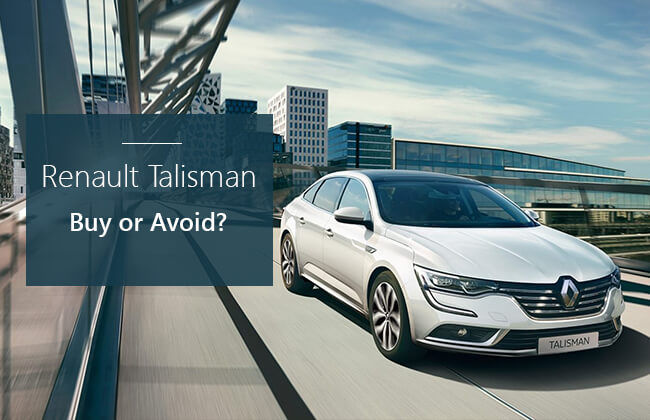 Renault hasn’t had a good start in most of the markets it has been. Its perhaps because of the perception that Renault makes only affordable cars and hence the quality could be compromised. However, many do not know that in F1, Mercedes-AMG uses Renault engines. Renault cars are highly regarded in Europe and reports suggest that the ASIAN countries too swears by these.

Just last year, Renault unveiled the Talisman sedan. Many thought that this will be the long overdue replacement for the Fluence. However, it wasn’t. The Talisman is a car which was placed over the Fluence and was immediately launched here as well. So should you buy one or will you keep thinking about Renault’s quality issues? We will ease it out for you.

We all agree that the Renault Talisman looks great. The chiselled bumpers to the attractive headlights. Everything about this Renault screams for attention. There is also a hint of the B9 Volkswagen Passat in this Renault. Renault’s design boss Laurens van den Acker’s signature C-shaped LED rings are present in the headlight enclosure. These lend the Talisman some amount of presence amongst cars like the Kia Optima, Nissan Altima, Honda Accord and Toyota Camry. An elongated body coupled to a low roofline ends up in the LED tail lights. We are already fans of the car’s styling and are sure that it will attract buyers primarily because of the way it looks.

The cabin is equally attractive like the exterior. The first thing that catches one’s eye is the tablet in place of the music system. It mimics Volvo’s Sensus system and frees the dashboard of any buttons. This leads to a nice uncluttered layout and one which most buyers will definitely appreciate. The leather seats with side bolsters and that chocolate brown upholstery all look tastefully done. Of course, they are electrically powered for the front occupants. Meanwhile, Renault also offers a head-up display, Bose music system with 13 speakers and rear AC vents. There is also the panoramic sunroof to spice things up.

The rear, as well as the front seats, give no reasons for any complaints. They are well adjusted for taller as well as shorter passengers. In fact, the front seats also offer a massage function. What more can one ask for. Did we mention a massive 608-litre boot?

There are multiple drive modes which can be controlled by the rotary dial in the middle tunnel or through the R-Link system. The driver can simply keep the Renault card in the pocket. Once the car detects he has arrived, it unlocks itself when the door handle is tugged. Switch off the engine and just walk away from the car after you have reached your destination. The car will lock itself. Cool, isn’t it? The handsfree operation also extends to the boot as well.

In terms of engines, there are two petrol motors on offer. One is a naturally aspirated 2.0-litre that offers 138 PS of power and 198 Nm of torque. The other one is a smaller 1.6-litre turbocharged unit but it pumps out 187 PS and 260 Nm of torque. Renault offers the 2.0-litre motor with a CVT while the turbo unit gets a 7-speed dual clutch. At 7.7 seconds for the ton, the 1.6 is quick while the 2.0-litre takes double the time to reach the mark. In terms of efficiency, the 2.0-litre unit is a bit better than the 1.6 though.

The drive modes ensure that the Talisman has the comfort associated with the show. This means electronically controlled dampers that provide a sophisticated ride quality. That is unless someone really wants to push the car. There are many electronic aids and this helps with the braking prowess as well as the general handling of the car.

At a starting price of AED 67,900 for the 2.0-litre and AED 82,900 for the 1.6-litre, the Talisman doesn’t come cheap. However, the long list of features and the subsequent engine driving dynamics ensure that the customer is happy in the end. Go for the Talisman as it offers the best in technology as well as amazing features.