Toyota Rush vs MG RX5 - Fight of the compact SUV 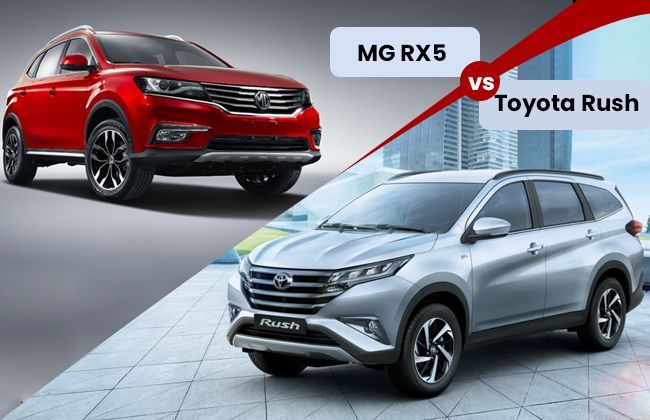 Makeovers are the new in-thing. Given the speed with which everything in the world is changing, or rather should we say, growing right now, it is essential to keep up with the time to stay and compete in the race. The Toyota Rush is one perfect example of this. The Rush has always been one very popular compact SUV for Toyota in terms of sales, but was it desirable and modern? Probably, not much, though.

However, come 2018, and Toyota has given the Rush a massive makeover in almost every aspect related to it – whether in terms of the way it looks and feels or the way it performs. Though, the going for the Rush towards the ladder of supremacy will not be as easy as before, for the competition has become fiercer than before. Thanks to the extreme popularity compact SUVs are enjoying, the Rush has got a series of rivals to watch out for, with the MG RX5 being one of them.

Both the Toyota Rush as well as MG RX5 are perfect samples of modern SUVs with sharp and aggressive design elements which do not lose out on sophistication as well. The dimensions of both the SUVs are large enough to give similarly priced sedans an envious feel. However, while the Toyota Rush has got an MPV-ish profile due to its longer wheelbase, the MG RX5 has got that traditional SUV touch despite its compact dimensions.

Talking about the Toyota Rush first, the compact SUV has grown in terms of size – totally. With an increase in length, width and height and comprehensive changes on the outside, it’s hard to believe that it’s the Toyota Rush and not a completely new vehicle. At the front, the rounded profile has made way for a sharper looking front chrome grille which blends well with angular full LED headlamp setup. This whole front fascia makes the Rush look much bolder than before. Another good looking design element has to be the large 17-inch diamond cut alloy wheels. At the rear, the angular design language has been executed thoroughly with nice looking tail lamps with LED inserts and roof-mounted spoiler, making the car look sportier despite its MPV-like profile.

As compared to Toyota Rush, the MG RX5 has got a smaller footprint. However, it is as imposing to look at as the Toyota, and for some, it might look even better thanks to its more proper looking SUV-ish stance. Like the Toyota Rush, the MG RX5 believes more on creases than curves, and has got a sharp and angular design language. At the front, you do get a sleek looking chrome grille which engulfs full LED headlamps on either sides. This front fascia might not look that wide and large as that of the Rush, but it still manages to look premium enough. Like the Rush, the MG RX5 too has got diamond cut alloy wheels. And at the rear, the MG RX5 feels more posh and busy, thanks to better styled LED tail lamps with prominent chrome garnish joining both of them.

On the inside, the differences between both the Toyota Rush as well as MG RX5 become a bit more apparent. In comparison, the steering wheel, as well as instrument console of the MG RX5 feels nicer to look at, as compared to the cost-conscious design of these elements on the Toyota Rush. Talking about the 2.0-liter console on both the vehicles, the design is quite similar. However, with a larger and more comprehensive touchscreen infotainment system as well as vertical AC vents, the centre console of the MG RX5 feels more premium. Also, while the dashboard of both the cars employs the dual tone black and beige theme, the dashboard of MG RX5 trumps ahead, thanks to a decent usage of chrome and fake wood inserts.

When it comes to features, both the compact SUVs are evenly matched with features such as touchscreen infotainment system, push-button start with keyless entry, electrically adjustable and foldable rear view mirrors, tilt adjustable steering, steering mounted audio and Bluetooth control, automatic climate control and rear AC vents. However, the MG RX5 tries to present itself as a more premium and better equipped SUV with additional features like panoramic sunroof, 6-way electrically adjustable driver’s seat, cooled glove box and cruise control. However, where the Toyota Rush has a clear advantage over the MG RX5 is the interior cabin space. The Rush has got an additional third row with an extra pair of seats. Along with that, with more legroom and headroom in its second row and more flexible seat folding options, it has more configuration options than the MG RX5.

The Toyota Rush, in comparison, too has got a 1.5-litre petrol engine mated to a 4-speed automatic, but with too much lesser outputs – 105 PS of maximum power and 135 Nm of torque. In addition, the 2.0-litre engine is also available in a more versatile AWD option, which the Toyota Rush simply misses out on. So, it’s very clear that if performance is your kind of thing, the MG RX5, with both of its engines, is far superior over the Toyota Rush.

Both the Toyota Rush and MG RX5 are fitted with McPherson struts at the front and multilink suspension at the rear. However, thanks to a more balanced dimensions setup, bigger wheels, more precise steering and stiffer suspension setting, the MG RX5 feels more agile and thrilling to drive. The Toyota Rush, however, has a softer suspension setup which makes it more comfortable to drive for longer distances.

Unlike the list of comfort and convenience features, the list of safety features on both the Toyota Rush as well as MG RX5 feels almost equal. Both the compact SUVs are laden with kit like front, side and curtain airbags, ABS with EBD, Electronic Stability Program, Brake Assist, Tyre Pressure Monitoring System, Hill Start Assist, Hill Descent Control, reverse camera with parking sensors and ISOFIX mounts. However, the MG RX5 gets an electric parking brake as the only additional feature here.

The Toyota Rush has been priced at AED 68,500 for the single fully loaded variant and is available in five color options, namely Black Metallic, White, Bronze Mica Metallic, Dark Red Mica Metallic and Silver Mica Metallic. On the other hand, the MG RX5 provides you more options with four different variants with prices starting at AED 53,000 and color options being red, blue, brown, black and white.

After comparing in almost all the aspects of engineering, it is evident that the MG RX5 emerges out as the clear winner in this comparison. While both the vehicles are handsome looking in and out, it is the MG RX5 which has more attention to detailing and features on board. On the other hand, the MG RX5 has a clear advantage over the Toyota Rush in terms of engine performance and driving dynamics, whereas the Toyota Rush wins over the MG RX5 when it comes to interior space and ride quality. So, if you are looking for a family oriented vehicle purposely for long distance touring, the Toyota Rush is meant for you. However, with a more finesse and value for money proposition, the MG RX5 is a better city commuter which can be taken for long distance touring as well, provided you have not more than five members on board.