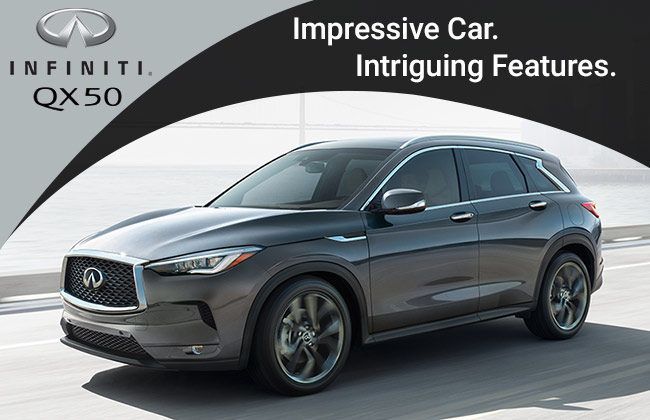 In today’s day and age of snazzy looking SUVs and crossovers, the Infiniti QX50 might look outdated and unappealing. Given the fact that the crossover has been in existence for a very long time with very limited changes on board. However, keep in mind that it is an Infiniti, which clearly means that it does come with some very unique and state-of-the-art features which still make it desirable, despite its slightly outdated exterior styling.

Following are the state-of-the-art features which make the Infiniti QX50 one really luxurious and a fine example of attention-to-detailing:-

A luxury SUV, by default, gets a premium as well as rich-in-feel sound system, and so does the Infiniti QX50. One does get an 11-speaker premium sound system straight from the design house of Bose. All the 11-speakers are strategically positioned to filter out extra noise and distortion so that you do not skip a beat.

Power-folding seats – Apart from the electrically adjustable front and rear seats for height as well as inclination, the rear seats of the Infiniti QX50 can also be folded electrically. The rear seats come with a 60:40 split ratio, with both the partitions of the rear seats having separate folding functions. It helps make the rear cabin space feel more versatile and functional in usage. All this, at the touch of just one button.

The 7-inch touchscreen infotainment system mounted atop of the centre console looks basic, as well as the absence of Android Auto and Apple Carplay, in today’s age make it feel a bit more archaic. However, the overall display of the infotainment system is crisp and clear. The other functionalities such as reverse camera and navigation with bird’s eye view are spot-on in terms of usage.

The feature of cabin and mood lighting turning on as soon as you unlock a car might have become too common in some mass-market cars as well. However, the Infiniti QX50 takes this feature to a next level by automatically turning on as soon as you reach near it. It lights up around the periphery of the vehicle, with the use of keyless entry function in an even finer manner.

The Infiniti QX50, like every other premium SUV, comes with a panoramic sunroof. This sunroof, apart from increasing the glass area of the car, adds in an airy feel in the cabin, which is better experienced on long and open highways, where the driving feel of the SUV is the best.

The design or layout of Infiniti QX50’s headlamps might feel outdated, but then, it looks magical when it lights up. The LED bi-xenon headlamps which the QX50 comes equipped with, shed more light in the direction of your turn, thus making the night driving experience cooler and safer at the same time.

One of the most attractive features of the Infiniti QX50, the around view monitor, which employs the use of moving object detection, as well as front and rear sonar for parking. These systems, give the driver a bird’s eye view while parking to get an idea about the gaps and objects around it.

The keys of the QX50 are not just meant to start and stop the vehicle, there’s more to it. Apart from playing a major role in welcome lighting, the keys of the QX50 come equipped with some really smart features like a navigation system, climate/audio choices, performance settings and steering as well as automatic seat adjustments when you unlock the vehicle.

For all the businessmen who are chauffeur-driven, this small but thoughtful feature plays a key role in the Infiniti QX50. The front seat headrests come fitted with retractable coat hangers on their backside. This feature ensures that one does not get blocked of the outer view, which does happen in other cars in which coat hangers are usually positioned within the grab handles above the windows.

The infotainment system of the Infiniti QX50 comes with a host of buttons and controls laid ahead of the touchscreen. This really cool looking cluster of buttons is touch sensitive which are nice and crisp in feel.

The overall design and colors used in the instrument console of the Infiniti QX50 might look just like in every other car, with a MID screen placed between two round dials with simple fonts. However, the two dials, one each for speedometer and tachometer, are tilted towards the centre, so that they are optically aligned in your line of sight.

As a current norm in every other luxury SUV, the Infiniti QX50 too gets a host of interior customization options. One does get a choice of three interior colors – wheat leather, chestnut leather and graphite leather. It also comes with two trim options – black lacquer and aluminium and maple accents, which helps the owner to customize the interior colours as per their preferences.

For the UAE market, the Infiniti QX50 comes with only one engine option – a 3.7-litre V6 petrol engine, which puts up 326 bhp of maximum power and 361 Nm of maximum torque. The engine is mated with a 7-speed automatic gearbox and an all-wheel drive is offered as standard. The Infiniti QX50 comes in a choice of seven colors; Majestic White, Liquid Platinum, Graphite Shadow, Hagane Blue, Midnight Garnet, Malbec Black, and Black Obsidian.