Infiniti QX30 - All you need to know 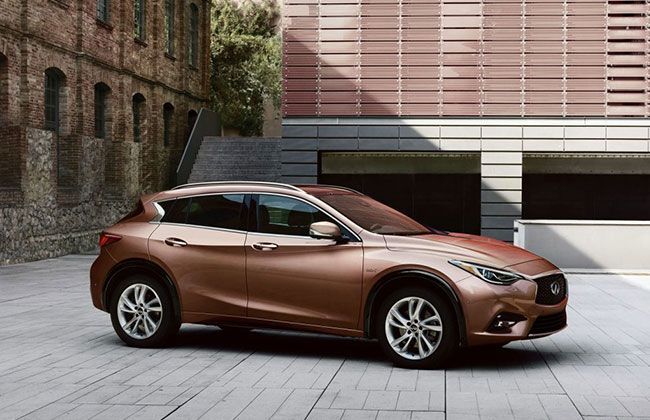 Making multiple iterations of a successful body style is a popular idea these days. Many have done it. While this is rampant in developing nations like Brazil or India, the eventual result is that these vehicles are also exported to other parts of the world. For example, there is the Hyundai i20 Active. It is based on the Hyundai i20 but gets a rugged package and raised ride height to make it look like a pseudo SUV. The same formula is applied by Ford with the Ka. There is a Ka+ that makes use of the same ideas and is now Ford’s best seller in Brazil. Both these cars, needless to say, are exported and the world has now embraced this idea. This idea isn’t lost on the Japanese too. There is the Infiniti Q30. A wonderful package with respect to space and luxury on offer. Someone in Britain and Japan collaborated to make the Q30 SUV popularly known as the QX30. So, what's the new thing that the Infiniti QX30 brings to the table? Let’s check it out.

Would you believe it if we told you that the QX30 is based on the Mercedes A-Class and so is the Q30? You wouldn’t. But they are. These vehicles have been co-developed and there is a lot of content being shared between these. The Infiniti QX30 is something which looks like a bloated goldfish from the front. Yes, it isn’t that attractive to look at. However, we like the headlights and the LED elements around it. The skid plate adds to the brawn that Infiniti wanted to showcase. There are 19-inch alloys and while the GLA looks like it is well proportioned, the QX seems more like a coupe. At the rear, one can see the influences of the Nissan Juke. After all, Infiniti is the luxury arm of the Nissan Motors. The car measures 4,425 mm in length, 2.083 mm in width and 1,530 mm in height. It is reasonably compact as you can see from the dimensions.

If you thought that the car is smaller from outside, it is even smaller inside. No Honda philosophy here. For the base variant too, there is fabric upholstery (unlike Infinitis), steering wheel wrapped in leather, 8-way powered heated front seats, dual zone climate control with rear AC vents, auto dimming rear view mirror, heated ORVMs, twin USB ports supporting smartphone connectivity, Bose 10-speaker audio system and Park Assist. While the front seats are very comfortable, one tends to sit a tad low, just like in the hatchback. However, the extra 30 mm over the Q30’s ride height does give it a bit of advantage.

Getting in and out of the rear seat isn’t as easy as say an SUV like the Audi Q3 or even the smaller Q2. The doors don’t open wide enough and there is less legroom too. However, due to the rakish design at the rear, headroom too is a tad compromised. Boot space is decent but the access to it, isn’t as easy. The loading lip is placed higher and hence loading heavy suitcases will be an exercise. The top spec trim adds wooden materials in the cabin and brings in leather upholstery too. There is also the ambient lighting, Infiniti kicking plates, suede-like headliner and more. The infotainment system can be controlled by touch and also has physical knobs like the GLA. However, the system is a tad laggy and doesn’t have the intuitiveness of the GLA. It also doesn’t host Android Auto or Apple CarPlay, something which the entire Nissan range doesn’t subscribe to either. A big miss there.

If you have seen Mercedes-Benz engines, then you will be familiar with the 2.0-litre four-cylinder turbo petrol motor that runs under the hood of the Infiniti QX30 too. This engine makes 208 PS of power at 5,500 rpm and 350 Nm of torque between 1,200 - 4,000 rpm. A 7-speed dual clutch transmission powers all the four wheels. The run-up to 100 kmph is done in just 10 seconds whereas the top speed is 210 kmph. The engine overall is refined and its only towards the higher rev ranges that it exhibits a growl which is a pleasure to listen to. At the lower rev ranges, the dual clutch transmission takes care off the turbo lag. The gearbox though is slow to respond on upshifts and that somewhat takes away the pleasure of driving. Keep it at part throttle and you are indeed looking at a relaxed cruiser that does the job well too. Expect an efficiency of around 11 kmpl overall from this big engine. Engine start-stop button, is standard fitment.

The Infiniti QX30 handles decently while the ride quality from the MacPherson struts at the front and multi-link torsion bar type at the rear is better than the slightly stiff feeling of the GLA. While it looks like a hatchback, there is no awkwardness climbing up the off-beaten path too. However, if one doesn’t go overboard and expect a Montero kind of wading or climbing capability, then the QX30 does just fine.

There are two trims available with the Infiniti QX30 in UAE. These are the 2.0 Luxe for AED 157,000 and the 2.0 Luxe Sensory for AED 174,000. For the extra money, the latter doesn’t offer anything significantly more than the Luxe and hence it is recommended to go for the former.