5 Best and fastest SUVs in the UAE 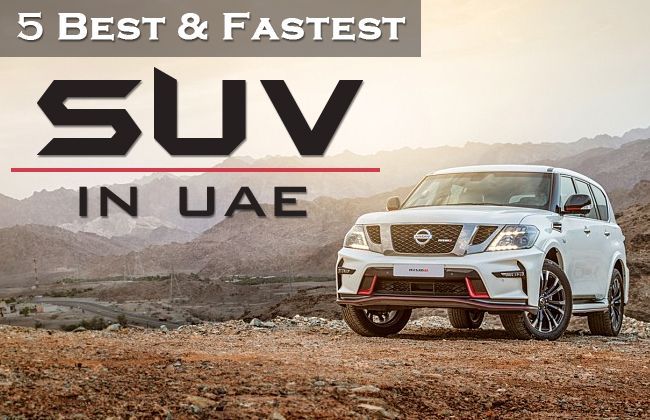 “Speed”, the very word that has fascinated man since ages. Barring the tachophobia suffered population, we all have always loved the thrill that a speeding vehicle provides. In childhood, we’d crave for notebooks with big and fast cars on their cover. Then there was the batman’s Batmobile. Muscular SUVs have been on every automobile enthusiast’s bucket list.

With the passage of time, the technology, however, has not evolved much. The combustion engines have remained the same throughout the last century and they still work on pretty much the same principle. But thanks to the same old fuel detonation tech, they are now bigger than before. And bigger is always better, right? The larger engines now mean more power, and the beast mode right there under our foot. Just a push and we are off. Let’s go ahead and have a look at 5 of the best and fastest SUVs one can possess in the United Arab Emirates.

Coming from the stable of the luxury unit of Toyota, a renowned Japanese manufacturer. The luxury is quite evident too. Whenever one hears Lexus, luxurious sedans come into the mind. But who said luxury can’t come with a beast mode? Who won’t love to have that kind of a luxury? The Lexus LX570 Platinum Signature holds luxury in its name itself. Platinum ain’t no cheap thing! Fun apart, the SUV packs quite a look at the outside. There are not too many curves around, it looks big and unavoidable. There is a huge grille resting between all LED headlamps which sit at an angle. But wait, who’s here for the looks? The humongous SUV is the house of a 5.7-litre 8-cylinder petrol hungry motor. This engine can produce a max power of 362 PS and a peak torque of 530 Nm. The power made is then delivered to all four wheels via an 8-speed automatic unit. Despite being first in our list, the Lexus LX 570 Platinum Signature reach a top speed of 220 kmph. How’s that for starters?

Second in our exclusive list is the Nissan Patrol Nismo. Another one from the land of the rising sun. The Japanese definitely know how to make big-bad vehicles. Riding on 22-inch forged-alloy wheels from RAYS, the Nissan Patrol Nismo has that eye-catchy element to it thanks to the red accents here and there. With not much curves and in-your-face sort of muscular appeal, the SUV from Nissan has got the visual checkboxes ticked. The leather upholstery with wooden trim elements is a treat. Let’s come to the objective now. There is no car fashion show going on here. Under the hood, the Nissan Patrol Nismo has a 5.6-litre DOHC V8 motor. Producing 434 PS of max power and 560 Nm of peak torque, the SUV is a hardcore powerhouse. It also gets an all-wheel-drive setup with power delivered by a 7-speed automatic unit. The maximum it can take you to? With no official top speed, the Nissan Patrol Nismo goes well above the 200 kmph mark.

Packing some cool and modern looks is the Land Rover Range Rover Sport 5.0L V8 SVR. The supercharged SUV by Land Rover is a complete no-nonsense machine. With luxury and power given a perfect blend, this SUV can satisfy both aesthetic admirers and power hungry junkies. Gloss black exterior trim accents, red Brembo brake callipers, and perforated leather seats all add to give it that flair. But hidden under all that the glorious beauty is a 5.0-liter V8 DOHC petrol engine. This motor is capable of churning out a max power of 575 PS and a peak torque of 700 Nm. An 8-speed automatic transmission is there to send that whooping power to all 4 wheels. The Range Rover Sport SVR can do the 0-100 kmph in a mere 4.5 seconds. Breaking the speed limits and leaving all the competitors behind you can reach up to a top speed of 283 kmph in the fast flowing beauty from Britain.

A list featuring the best and the fastest SUVs? How come Mercedes-Benz lag? And it didn’t either. Coming all the way from Germany is the Mercedes-Benz GLS63 AMG 4MATIC. Based on the GLS-Class, the GLS63 AMG is much more appealing and makes one crave for it very easily. This particular offering from Mercedes is the result of hardcore off-road and track testing in the bid to build a best in class SUV. And following the “one man, one engine” philosophy, the German manufacturer has left no stone unturned in making sure that the final product is a performance beast. AMG Performance steering wheel in black Nappa leather, Thermotronic automatic climate control, and Harman Kardon Logic 7 surround sound system take care of the luxurious riding experience. The heart throbbing performance is provided by a 5.5-litre V8 DOHC petrol-fed mill. Producing 593 PS of max power and a peak torque of 760 Nm the Mercedes’ SUV can hit a top speed of 280 kmph which is electrically limited. Guess what it could do with that limit removed? Pure thrill machine it is.

Last, but not least on our list showcasing the best and the fastest SUVs one can have in the UAE is the Dodge Durango SRT. The final member of our premium list comes from the land of muscle cars. Dodge, the American manufacturer has been well known for its muscle cars which are capable of boasting both unavoidable looks and unmatchable performance. The Dodge Durango SRT is no different. Boasting a functional hood scoop, minimalistic styling, cold-air ducts and all LED fog lights the Durango SRT looks classy and pleasing to the eye. Especially in the color white, it looks nothing less than neat and tidy well-behaved boy with all the mischievous elements hidden under the hood. What powers the Dodge Durango SRT is a 6.4-litre Hemi V8 mill that produces a max power of 482 PS and a peak torque of 637 Nm. A 0-100 kmph run won’t take any longer than 4.4 seconds. Got some space? Put some metal on the pedal and the Dodge Durango SRT will make you talk to the winds at no less than 288 kmph.

So, that was our list of 5 of the best and fastest SUVs one can get in the UAE. We hope you enjoyed the article and found your favourite SUV on the list as well.