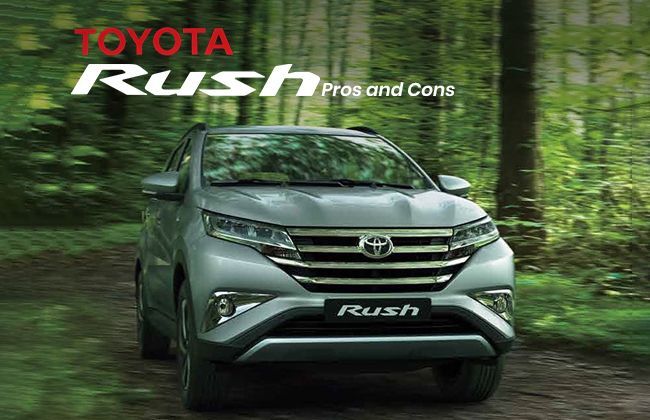 The 2020 Toyota Rush is one of the only few offerings in the segment which gets a ladder-on-frame chassis which means that the crossover offers incredible off-roading capability as compared to other cars in the category. The ladder-on-frame chassis does result in compromised handling characteristics and there is an understandable body roll which is common in a car of this size. We will now take a look at some highlights of the all-new crossover SUV as well as take a deep look into its drawbacks.

In the United Arab Emirates, Toyota offers the 2020 Rush in a two variant lineup with prices starting at AED 93000. Check out the 2020 Toyota rush price in UAE -

Under the hood, Toyota offers a 1.5-litre engine that powers the crossover SUV. The four-cylinder powerplant comes mated to a standard 4-speed automatic gearbox. Toyota Rush is only available in a rear-wheel-drive setup and it takes 13 seconds to hit the 100 kmph mark while the engine is revving at 3000 RPM. Check out the Toyota Rush specs sheet -

2020 Toyota Rush is an attractive offering in the segment and with third-row seating, it offers convenience and practicality unparalleled to most rivals in the category. The 1.5 litre engine does feel rather underpowered and takes forever to hit the 100 kmph mark but the ladder-on-frame chassis does offer impressive rear-wheel-drive characteristics and can take on some of the more challenging road surfaces quite easily. With its competitive price, the 2020 Toyota rush is a very well positioned offering that comes equipped with everything a buyer in this segment could need.

Also read: Toyota Land Cruiser - All you need to know